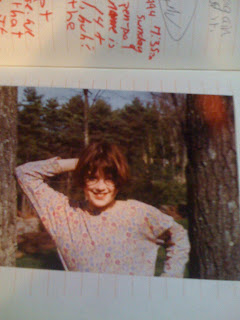 Above: the fabulous Diana-- a photo glued into my journal along with this entry. I'm pretty sure she's wearing my shirt. And I'm pretty sure we took this picture on some sort of model-esque photo shoot we were doing.

May 11, 1994
Dear Bethany,
Today I woke up and found out a bee was in the back hall so I went insane. I didn't get stung though. I got to school and found out Allison had broken her arm!! In gym we did gymnastics. We're practicing for the Open House. Poor Allison, she can't be in it!!
I'll start a new Friends List.
1. Diana: Diana has been my best friend since my second year of nursery school. .She used to dress really strangely, but she's pretty normal now. She's got a dog- Sandy, and a new kitten, O. She has 1 brother, Ross, who's 12 (she's 10). She has short brown hair and glasses. She doesn't take anything seriously anymore. And when I tried to tell her that she just started laughing!
Love,
Corey
I may think I'm fooling someone with my fake sympathy for Lydia, but that little comment about gymnastics at Open House is a dead giveaway. Allison was totally my main competition for being an adorable little gymnast. The fact that she broke her arm and wouldn't be able to perform was nothing short of thrilling. That much I am sure of. You can tell my the multiple exclamation points that I am just barely masking my joy.
Poor Diana, I am so hard on her. And I love that I am somehow the fashion expert. What with my fabulous collection of patterned vests and weirdo hats and let's be honest, just some seriously upsetting clothing choices. Given this, I wonder what "pretty normal" means. What's the scale we are talking about here? Pretty normal... more like ME? more basics? I'm not sure I'm in any position at this point to be judging normality.
As for the seriousness-- I took myself SO seriously that it would be hard to compete with that. And given that I have now promoted Diana to the number one spot... why do I not have anything actually positive to report?? Conundrum.
No comment about the bee. I just think its funny all on its own. Little did I know I would someday have to deal with mice in my apartment.
Posted by Corey Haydu at 9/10/2009 09:50:00 AM 5 comments:

May 2, 1994
Dear Bethany,
Today was SHIT. First, Evie told me that she and Mona were in a fight. She started crying. (Mona is her best friend). Also, Allison got mad at me because I "made up with Piper". (I was in a fight with her) Allison said "you only need me when you're mad at Piper. You know what? That's not true! Allison and Diana are my best friends!!
That's IT!
Love,
Corey
It's so hard to keep up-- mostly in terms of the fight between me and Piper. I mean, every other entry we have either gotten in a new fight or made up from an old one. It's really exhausting. These days I prefer to stick with one emotion per friend. Or at least if we're friends I'm committed to trying NOT to fight. That doesn't seem the case with me and Piper. I think we mostly just follow every single impulsive emotion to its full capacity.
I like that Allison called me on my shit. I mean, its too bad it make no impact on my thoughts, feelings, or behavior. But its a good effort none the less. I don't think I intentionally used people. But I think mostly my friends were there to assist me. And I don't know that I was so supportive (In case you have forgotten... i have not... I wanted to tell Allison she couldn't have a boyfriend if we were to maintain our friendship)
I will focus on the teeny tiny evidence of my current, more sensitive self-- I actually give a shit that Evie is fighting with her friend, and seem to feel bad that she is crying. My sympathy seems to be sporadic and arbitrary, but at least it exists.
Posted by Corey Haydu at 9/04/2009 11:25:00 AM 1 comment:

Crying at School and Other Corey-Like Behaviors

April 26, 1994
Dear Bethany,
Hi! I'll start on the rest of Thursday. I went to Diana's. Diana just got a new kitten. His name is O. He's cute, but she's obsessed with him. I forget Friday but on Saturday Allison came over and we played and a Wellsley College babysitter named Maren came. She is sooooo nice!
I also convinced myself that Patrick is a lame bitch. Now I like Derek, a guy at the lake in New Hampshire.
Sunday, Diana came over and we went to the Museum of Fine Arts. It was sooooo boring. Today, Tuesday, was ok. I'm in a fight with Piper. Georgia AND Corrine took Piper's side. I'm losing all my friends!! I was so sad that I cried and Mrs. Jefferson saw so I had to tell her about our fight. Also I think Patrick saw me cry. I know I said I don't like him but I kind of do. I was soooo embarassed.
Musical Theatre class was awesome today! I even TALKED to people. I had a GREAT time.
Love,
Corey
Patrick is a lame bitch. I love it. Where do I get these wonderful turns of phrases? I think I may have to reintegrate this one into my vocabulary. And Derek? He was kind of an ass. And also not someone I saw with any kind of regularity. Which begs the question-- how did I randomly decide to set my sights on him? And how will I feed the obsession if I never interact with him?
... I guess its fine since I actually admit to still liking him in the SAME ENTRY. I guess my self delusion is not terrible successful at this point in time. Kinda refreshing.
Ah. Crying in school. I think its possible I did more crying in school than actual learning. And if Patrick witnessed it, it was probably a good thing-- he should really get to know the real me if we're going to end up together forever.
I TALKED to someone in class? AMAZING! WAY TO GO!
... was some weird mute girl? I don't seem to recall but I seem unnaturally proud of actually interacting with other people...
Posted by Corey Haydu at 9/02/2009 11:30:00 AM No comments: